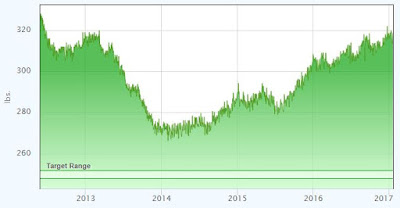 Today I feel overwhelmed, and I'm trying to put things back together.

As I re-arranged my blogs this week (separating jaggers.pw and abcinc.biz) I revisited my two blogs about Parkinson's Law.  The first article was that I was acting as if I had too little to do; the second one I complained about over-filling my plate!

Try as I may, I cannot shoehorn my 318-pound conundrum into Parkinson's Law.

I've been re-reading the yellow composition notebook that I've been carrying.

January 15 was the first page. It had a couple addresses, Mom's SSN (probably for CreateSpace) and a note-to-self to order Manheim Steamroller CDs after Christmas. I never did.

On June 20 I drove Bobby's ashes to Virginia. There were several pages that detailed the mechanics of the trip such as distance, speed, mile-markers, etc. But nothing was recorded about the weather, scenery, the cemetery.

The next entry was over a year later, on September 3. It was a quote from the TV series Sparticus that I liked well enough to record:


Apparently I had a doctor appointment on November 20, because that entry listed questions I wanted to ask and incidents I wanted to discuss...