In the 1980's the cat in my life was named Cassius Clay, but mostly I referred to him as "Cash."

Cassius gave me a lot of companionship, and a wealth of memories to share...

The house remained in the Clay family until 1968, when it was donated to the state of Kentucky. 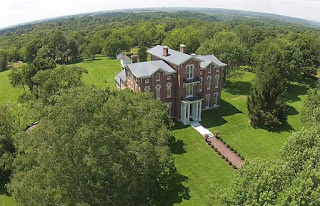 The state added it to their park system and restored it to it's peak from the 1860s when owned by Cassius Clay.

When I visited White Hall in 1985ish, the building and grounds were open for tourists.

The guides were dressed in period clothes, including the occasional frilly hoop skirt.

The tour began at the front door, and each room had its story to tell.

In the living room we learned that lack of closet space was because homes were taxed on the number of closets. (This, I suspect, explains all the wardrobes from Colonial New England.)

The guide pointed to the ceiling, saying that this was the original split-level house. The original building had 18-foot ceilings, and the 1860 addition only had 16-foot ceilings. (Pause for obligatory groan).

As the group went up the stairs, we learned how much innovation was involved, including hot/cold running water, a bathtub, and indoor pluming.

The second-floor bedroom had to have been more than 400 square feet in size, with tall ceilings, big windows and doors to a large porch.

Here the guide paused to give some history of the Clay family.

In 1861, Abraham Lincoln appointed Cassius Clay as ambassador to Russia.

The entire household was packed up and sent overseas.

His wife came back several months later, claiming Russia was "too damn cold"

When Clay finally returned from Russia in 1869, he immediately sent for the son of a Russian ballerina whom he "proceeded to raise as if it were his own child." (Very carefully phrased, Wink-Wink)

That, and Clay's Kentucky infidelities, led to a divorce a decade later. 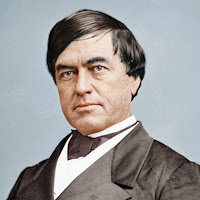 The tour group came down the back stairs, through the serving room (the kitchen with it's fire place, was in an out-building), and stopped in the music room where we learned that Cassius Clay, at age 84, married a 15-year-old girl. (They divorced a few years later.)

I was unmarried, and in my mid-thirties: I was impressed and inspired with Clay's can-do spirit.

Shortly afterward I returned to Shreveport, a friend presented me with a kitten.

With the White Hall Shrine tour still in my mind, I decided that the kitten should be named Cassius, in respect and honor of the rascally cavalier spirit of Cassius Clay!