Cassius (AKA "Cash") was a good companion for me.

I was divorced in the 1978, and was pretty much living alone.

These are stories about Cassius in my life.


I was living on the 3rd floor of a relatively new apartment complex when Cassius came into my life. 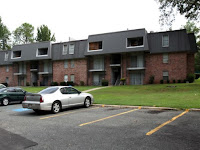 I had a deck extending from the living room, and it had two patio glass door that were 5-feet wide.

He needed a litter box, but I didn't want one in the house.

My solution was simple: I made my own cat door to the patio!

I started with a 1x6 piece of lumber cut to the height of the sliding glass door. A couple inches from the bottom, I cut a square hole almost 5" wide and 6-1/2" tall. I tacked a piece of towel to use as a flap.

The cat door and litter box on the patio served Cassius and me well for the time that we lived there. He was an almost-outdoor cat!

One evening a neighbor and his 6-year old daughter stopped by.

She was delighted when she was able to use a string to play with Cassius. Cash thought it was fun, too.

They started out doing figure eights around the coffee table and the couch. But she never slowed down, and Cassius the almost-outdoor cat was out of shape.

As she tired, she just picked up the string and continued running. Cassius never even noticed the string was missing. He was just focused on following her running feet.

Eventually she became more bored than tired and stopped.

So did Cassius. The moment he realized the chase was over he stopped where he was and flopped onto his side, panting.

He had no energy left: she had run him into the ground!


From Apartment to House

Eventually I moved from the apartment to a house, and Cassius came with me. He was probably a year and half old.

For the first week, I kept his litter box by the back door. He figured it out, and didn't have any "accidents" elsewhere in the house.

Then I moved the litter box outside, but kept it by the door. For the first couple days I'd let him to use the box, and he'd come back in.

I made another "cat door" in a bedroom window, and showed him that it was there.

For another few days he would go out the window, then slink along the wall to the litter box, take care of business, then return the same way.

Finally, when it came time again to clean and replace the litter, I simply spread the litter (and contents) across the back yard outside the bedroom window.

I never thought about litter training again, and Cassius never had any "oops" in the house.