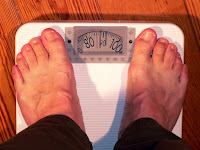 How to Cheat
Bathroom Scales

Did you know that two cups of morning coffee immediately add one pound to your body? I finally connected the dots on how this affects my daily weight! (PS: It doesn't really matter. Read on...)

I joined Weight Watchers over 20 years ago. At that time, WeightWatchers had two forms of accountability.

I was astounded at how seriously...
...some WeightWatchers members took their weekly weigh-ins!
The weigh-in ceremony was important because week-to-week differences of even a half-pound were publicly acknowledged. Members were quite proud of a 3-pound loss over a month.
I remember one meeting in February. The temperature was cold enough for members to dress warmly to get to the meeting. I observed one woman change into her summer shorts and stand barefoot on the scales. She was taking her weekly progress very seriously, and she recognized that how she dressed made a difference!
Another time I noticed that a "woman of size" was carrying a 64-ounce bottle of water that she sipped on all day. I did not observe whether she had sipped on it before her weigh-in, but I suspect she did.

A 2013 TEDx talk speaker used a pool noodle to illustrate how your digestive track works. Basically, he said that food passes through you and it is up to your body to extract the nutrients.  (https://youtu.be/vuIlsN32WaE?t=483)
From that video, I realized that the actual weight of food matters, but it (cough, cough) eventually passes. When I eat a big meal then the ounces and pounds of the food were immediately reflected on any scale. Later, at the other end, I can reduce my weight by a pound or two.
I also realized that the actual weight of liquids matters, and fortunately it eventually passes, too. Eight ounces of water immediately adds one-half pound to your body weight.

I promised you this advice for in-person interactions with their scale
That last bullet of advice keeps you from gaining weight because you only changed shoes.

My Own Daily Routine

I try to stop eating early in the evening, then I weigh myself each morning, as soon as I wake up.
Before my personal weigh-in, I make a trip to the bathroom to empty my bladder and bowels. Then I stand barefoot and mostly nude on the scales. That provides day-to-day consistency.
That is the weight I record. (A small cheat: I truncate instead of "rounding" the extra ounces on my digital scale. 235.8 pounds is recorded as 235.)

I've learned to ignore small fluctuations because there may still be left-over food or liquid in my body that has not yet - and may not - have been metabolized.
I've learned to look at the results over an extended period of time. The green image on the right shows my weight change over 7 years.
Two cups of coffee later, I'm a pound heavier. 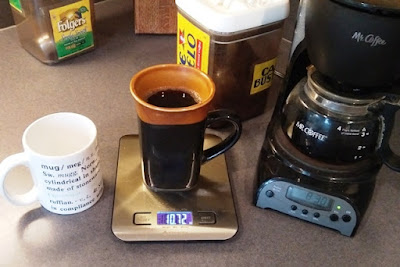