FYI: My Why I Chose Roku Devices

In February, 2019, I "cut the cord" by dropping my cable TV subscription and began using an Internet streaming device.

I personally use Roku, and here's why...

My first bias is that I hate in-your-face commercial advertising, and I want to talk about that for a moment.

In-your-face advertising is one reason why a digital video recording device (DVR) was one of my favorite features from my cable provider, Spectrum.

I could record a show, then when I watched it later I could fast-forward past the 30% of the time that was used for commercials. That's 10 minutes of commercials in a 30-minute show, and a full 20 minutes of an hour-long recording!

As I began this journey, I attended a "cutting the cord" class at the Tampa Bay Technology Center (TBTC). They exclusively used the Amazon TV Fire Stick. I was impressed the features and functionality and the internal memory.

But the Fire Stick home screen has over 50% advertising for Amazon. Even the TBTC instructor talked about it.

The two other major devices are Apple (Apple TV) and Google (ChromeCast).

Apple TV is pricey, beginning at $175. I'm frugal to begin with, and I am not an Apple fan.

Google is cheaper at $35 but requires a PC; it duplicates the PC display on the TV. I do have a first general Chrome, but I rarely used it.

Roku often puts one of its devices on sale each week, beginning on the weekend.There is usually a $10 savings that is honored at Amazon and Wal-Mart.

PS: I'm still please with cutting the cord!
My charges have dropped from over $200 to $81: 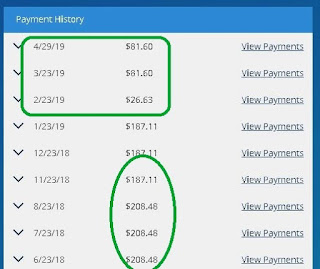 I wrote a followup article on June 20th. You can follow this link to read it: "Opps! More Cutting the Cord" (http://www.jaggers.pw/2019/06/fyi-opps-more-cutting-cord.html)