The Jaggers Room at EKU

The Jaggers Room was originally dedicated in 1973 as a meeting room in the Student Union building.

In 2019 the Student Union was renovated, and in 2020 the Jaggers Room was repurposed as the EKU Veterans Center.

The dedication ceremony was held on August 25th, 2020. You can watch a 5-minute snippet on YouTube.

There are many positive points around this!

First,  the University continued to honor my grandfather's service to Kentucky education in general and his connection to the University in particular.

Next, it is entirely appropriate that the next use was to serve US military veterans.

Finally, according to the speakers at the dedication ceremony, EKU has the largest veteran student population in the public higher education system in Kentucky!

Kudos to the EKU Veterans Center Director, Barbara Kent, for organizing the ceremony and for including Dr. Jaggers' descendants! 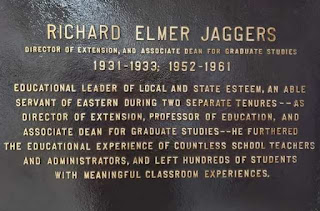 Here is the YouTube snippet that recognizes Dr. Jaggers (4 minutes) .